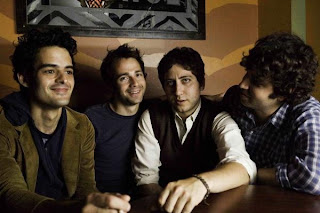 I saw these guys open up for The Spinto Band the other night at the Troubadour and they were really great. Apparently they have been quite big on the Chicago scene for a few years now, and were the only unsigned band to play Lollapalooza 2005. Their live show is really something to see, I knew I was in for some shit when the roadies were setting up 2 keyboards and a large xylophone on the stage. Check them out at SXSW:

The Changes- On A String
The Çhanges- Water of the Gods
Posted by mikerog at 12:19 PM