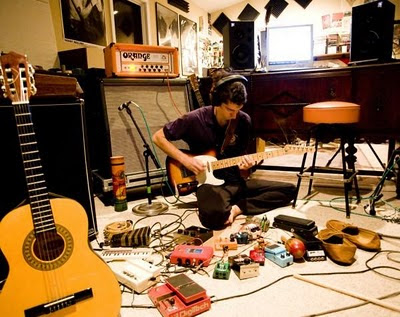 Hot off a tour with Fang Island, New Jersey's art rock weirdos Delicate Steve have been getting some major buzz online. This phrase gets thrown around entirely too often, but their music really is "hard to classify." Take a listen to "Butterfly" to see what I mean.

Perhaps even better than Delicate Steve's music is the bio that the one and only Chuck Klosterman wrote for them. Read it below in its entirety.


Newton, N.J. – Every 30 or 40 or 500 years, the DNA of culture itself emerges from the translucent blackness of the not-so-shallow underground. You hear a new band, and you think, “This is really something. This is like My Bloody Valentine, minus the guitars.” But then you think, “No, that’s not true. That’s not what this is like at all. Plus, there are lots of guitars here. I’m a goddamn idiot.” You want to walk away, but now it’s too late; now, you start to wonder what makes this music is so deeply arresting. You wonder why you are dancing against your will, and you wonder why every other sound you’ve ever heard suddenly sounds like the insignificant prologue to a moment you’re experiencing in the present tense. You find yourself unable to perform the simplest of activities — a cigarette becomes impossible to light, a mewing kitten cannot be stroked, a liverish lover cannot be ignored. By the album’s third track, there is nothing left in your life; everything is gone, crushed into a beatific sonic wasteland you never want to escape. This, more than anything else imaginable, is the manifestation of artistic truth … a truer kind of truth … the only kind of truth that cannot lie, even with the cold steel of a .357 revolver jammed inside its wet mouth, truculently demanding a random falsehood.

Welcome to the work-a-day world of Delicate Steve.

Like a hydro-electric Mothra rising from the ashes of an African village burned to the ground by post-rock minotaurs, the music of Delicate Steve will literally make you the happiest person who has never lived. Discovered firsthand by Luaka Bop A & R man Wills Glasspiegel in the parking lot of a Newton, N.J., strip mall, Delicate Steve was signed to the label before anyone at Luaka Bop heard even a moment of their music – all he needed to experience was a random conversation about what they hoped to achieve as a musical five-piece.

“They were just sitting around in lawn chairs, dressed like 19th century criminals, casually saying the most remarkable things,” recalls Glasspiegel. “It was wild. It was obtuse. One fellow would say, `Oh, I like Led Zeppelin III, but it skews a little dumptruck.’ Then another would say, `The problem with those early Prince albums is that he spent too much time shopping.’ I really had no idea what they were talking about, but it all somehow made sense. `We’ll be a different kind of group,” they said. `We will introduce people to themselves. We’ll inoculate them from discourse.’ I was immediately intrigued. I asked them if they wanted to have dinner, so we walked to a Chinese restaurant that was right up the road. I suggested we all get different dishes and share everything family style. They agreed. But then they ordered five identical entrees! So we sat there and ate a mountain of General Tso’s chicken for three straight hours, talking about music and literature and box kites and dystopias. Twenty-four later, they were signed to Luaka and inside a studio.”

Those studio sessions led to Wondervisions, the indescribable 12-track instrumental debut that reconstructs influences as diverse as Yes, Vampire Weekend, The Fall, Ravi Shankur, 10 cc, The Orbital, Jann Hammer, the first half of OK Computer, the second act of The Wizard of Oz, and the final pages of Jonathan Franzen’s Freedom. Originally conceived as a radio-friendly concept album about the early life of D.B. Cooper, de facto Delicate Steve leader Steve Marion decided to tear away the lyrics and move everything in a more experimental direction. “We don’t need the middlebrow to dig our music,” says the soft-spoken Marion. “We write for the fringes – the very, very rich and the very, very poor. That’s the audience we relate to, and that’s who these songs are about.”

THE BAND AT A GLANCE:

Steve Marion, 23 (guitar): A polymath who plays over 40 instruments, Marion recorded his first “bedroom EP” on a four-track as a 12-year-old (“It was sort of a second-rate Slanted and Enchanted,” he scoffs today, “and more than a little derivative.”). Already a Jersey legendary for his worth-ethic and perfectionism (he once studied a single Jandek guitar riff for an entire summer), Marion’s the piston behind Delicate Steve, and — somewhat paradoxically – the group’s harshest critic. “I named the band Delicate Steve as a reminder that we’ve accomplished nothing,” he says flatly. “We are as delicate as the wings of butterfly with AIDS. Anything could crush us. And until we all decide that art is the only thing that makes life livable, we’ll just be another instrumental five-piece from New Jersey. Emotionally and intellectually, I’m not sure if the rest of the band is there yet. But I am.”

Steve’s goal is to create music that lasts “substantially longer than forever.”

Mickey Sanchez, 22 (keyboard): A freewheeling hoaxster (and Marion’s best friend from Hebrew school), Sanchez provides Delicate Steve with off-kilter music flourishes and a necessary dose of common sense. “Steve can be difficult to work with,” says Sanchez, “but I know how to handle that hoss. Sometimes he just needs to look into the mouth of the lion – and I’m the lion.” An avid horseback rider and pastry chef, Sanchez also intends to pursue a second-career as a city planner.

Rob Scheuerman, 21 (guitar): Previously featured on axe in the teen-pop power-trio Yesterday’s Airport of Tomorrow, Scheuerman is probably better known as the alleged one-time paramour of Gossip Girl star Blake Lively (a rumor he sheepishly denies: “I was too tired to make it. She was too tired to fight about it.”). What he adds to the band musically is akin to what he adds personally: cobalt charisma and a hunger for flesh. “Do you remember that old song `I Know What Boys Like’ by the Waitresses,” he asks. “Well, let’s just say the scythe slices both ways.”

Rob’s goal is to seduce every female journalist he encounters.

Adam Pumilla, 23 (bass): No member of Delicate Steve has taken a more circuitous path than Pumilla. A three-sport athlete who rushed for 1400 yards as a veer option quarterback in high school, Pumilla received scholarship offers from several Big East football powers before opting for a career as a bassist – despite the fact that he’d never played the instrument in his life. “There was always something about the bass,” he says today. “Four strings, sublime heaviness, living inside the pocket, locking into the drums. It spoke to me in its own bass language, long before I ever possessed the object itself. I knew that bass guitar was something I could excel at. I am a bassist. I have a bassist’s blood.” After spending five exploratory years in rural Scotland (“I needed space to invent my bass style”), Pumilla returned to the U.S. and met Marion at Ed Westwick’s Halloween party. “I knew he was the man for this band from the moment I met him,” recalls Marion. “When he shook my hand to introduce himself, he didn’t even say his name. He just said, `Bass.’ Just that one word. Nothing else. He was a serious person.”

Adam has no defined goal.

Mike Duncan, 21 (percussion): Don’t let his boyish looks fool you – Duncan is no choirboy. Raised on a steady diet of Stewart Coupland, Neil Peart and economic desperation, Duncan views drumming as a way to turn his self-described “sociopathic inclinations” into something the world can appreciate. “I love to brawl,” he says. “I’ll fight anyone, for any reason. I’ll fight a dog for no reason. I’ve seen the inside of juvenile hall. I’ve tasted blood in my mouth. I’ve stepped on throats and I’ve thrown bottles at strangers. But that was all in the past. It’s still part of me, but – now – I use that intensity for good. I want to attack people with music the same way I used to attack them with my fists.”

Mike’s goal is the political liberation of Quebec.

This is a press release, and press releases are supposed to be wholly positive. That’s the shared expectation, both from the writer and the reader. Typically, press releases hide a band’s true reality. But not this one. We need to be straight with you, potential rock writer: It’s hard to predict what will happen to Delicate Steve. Emotions run high in this band, and most of these songs are both too musical and too insane for the typically dim-witted American consumer. In all likelihood, even you won’t understand it, because you’re probably a fraud. This music doesn’t directly threaten the status quo, but it certainly makes the status quo nervous. It’s not on par with hearing the Velvet Underground in the summer of 1965, but it’s probably like hearing the Velvet Underground in the winter of 1966. Can Delicate Steve become the wordless New Jersey U2? Sure, maybe. But maybe not. There might be too much at stake (and too many people in the way). Still, one listen to Wondervisions will irrefutably prove the only thing you really need to know: Delicate Steve makes music. And in today’s awful world, that’s almost all that matters. Right?
Posted by mikerog at 1:02 PM