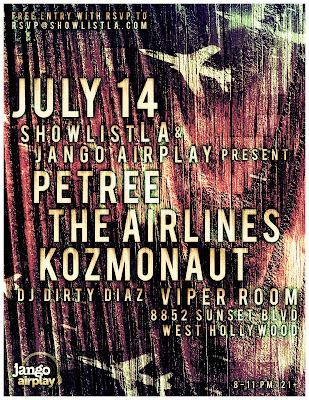 Come out and see some great live music and spend the night with your music industry friends at showlistLA and Jango Airplay’s showcase night on July 14th at The Viper Room.

Petree - http://www.myspace.com/petree
Petree has developed a unique style that incorporates many aspects of modern music and creates an alternative/pop dance sound that is filled with deeply passionate tones.
The lead singer, Stephen Petree, is a former member of Shiny Toy Guns and is a Grammy nominated songwriter.
Petree’s album “Weakness Makes You Beautiful” was released May 18th, 2010 on Dream Records/Universal Music Group.

The Airlines - http://www.myspace.com/airlinesmusic
LA Locals have been selling out shows around town. Wiith a new percussion section, the live shows have been energetic and crazy. Currently the band is in the studio finishing a soon to be released EP featuring "Neon Moon."

Kosmonaut - http://www.kozmonautmusic.com/
Combining a mix of Queens of the Stone Age, PJ Harvey & Nick Cave...Kozmonaut is a dirty mixture of distorted guitars, moody vocals, Pink Floyd bass lines and drumming that you can feel.